VERSUS started in 1994 in Glendale, AZ and moved to Los Angeles in 1999. For over the past 25 years, Versus has been 1 of the Grand Father in the Import Scene as one of the most heaviest track records in the Sport Compact Car Industry. Brand Building & Marketing has been ONE of the strongest company expert such as building Advan Carbon, Charge Speed & VeilSide brands for the American market. Including with the involvement of the Fast & Furious Movie franchise in the early days. Sponsoring with own Company car Honda S2000 (Black color Johnny Tran's ride) on the Fast & Furious as well as Honda S2000 (Pink color Suki's ride) Acura NSX (Gold color Tej Parker's ride), Mazda RX7 FD-3S (Red color Orange Julius's ride) & Toyota Supra Mk4 (Gold color Slap Jack's ride) on the 2Fast 2Furious and continued to the Fast Furious III/ Tokyo Drift. Versus also been involved with vehicle manufactures such as Chevy, Honda, Mazda, Nissan, Scion & Toyota with project cars for SEMA Shows and other Nationwide shows such as Ken Miyoshi's Import Showoffs, Hot Import Nights & Mitsubishi Owner Days (MOD) shows to name a few. Further, Versus had been working together closely with World Class Racers such as Daijiro Yoshihara, Fredric Aasbo & Stephan Papadakis to name a few as well as RJ DeVera as one the the most respectable Import Car ICON up to these day.

Veilside Co., Ltd. (ヴェイルサイド株式会社) Vueirusaido kabushiki gaisha, officially stylized as VeilSide) is a Japanese aftermarket automotive company which initially sold suspension and performance engine tuning parts, and now a well-known company sells interior as well as body parts for aerodynamic and aesthetic enhancement of the vehicle which now World-known as one of the Best Design in the World.

Great talent starts from creating The VEILSIDE name is derived from the owner's name, Yokomaku Hironao. "Yoko" means "side" and "Maku" means "veil", which were then conjoined to form the company's name "VeilSide".

Based in Japan near the Tsukuba Circuit race course, the company first started its business in 1990. It initially focused on performance tuning, and at the 1991 Tokyo Auto Salon VeilSide took the Grand Prize in the Tuned Car category.[citation needed] Hironao was influenced by the 1960s Batmobile and made his designs along those lines.[citation needed] In 1994, the Supra COMBAT design was released which earned the Grand prize at the Tokyo Auto Salon in the Complete Car category. 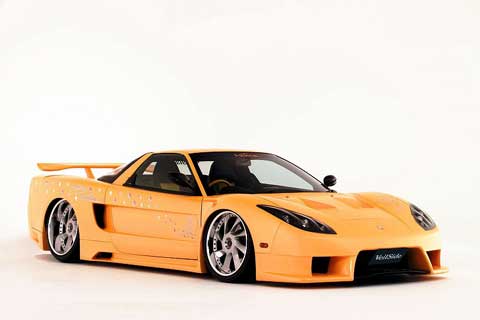 In July 1995, VeilSide received the Ministry of Transportation's authorization for the production, distribution, and selling of a range of aero parts. Following this acceptance, VeilSide began to produce a full range of products. Their aerodynamic parts catalogue was originally intended for Japanese models, such as the Toyota Supra, Mazda RX-7, Subaru Impreza, and Mitsubishi FTO although they have since extended their portfolio to include American and European models. VeilSide produces a Body kit called "Fortune" which replaces all body panels except the roof. It is currently available for the Mazda RX-7 FD3S, Toyota Supra Mark IV, Acura NSX, Toyota MR-S, and the Nissan Skyline V35/V36. The Fortune kit also turns Nissan Skylines into Infiniti G models as well as RX-7 which later used by the World Famous Block Buster Movie Series Fast Furious. VeilSide manufactures aerodynamic wing mirrors and GT-style wing spoilers and also its own line of clothing.

The company made its own wheels available under the brand name of VeilSide Andrew Racing Wheels which now made by Strong 6061 Aluminum Forged materials. Many of their factory cars from the late nineties featured these wheels. As of January, 2006 VeilSide's website lists all three designs—Andrew Evolution V (18 inch and 19 inch), Andrew Golt Dish (18 inch), and Andrew Dish (18 inch)—which now all of these has been discontinued and replaced with 20” Andrew Evolution V, this is why most of VeilSide products have high resale value once discontinued as it is become collectible. 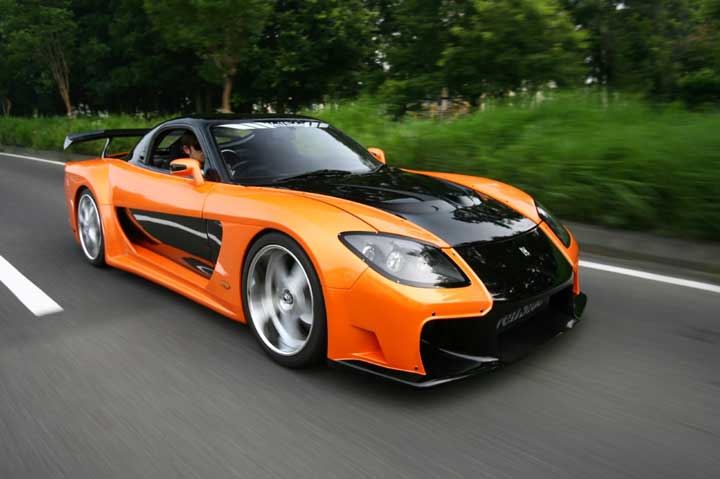 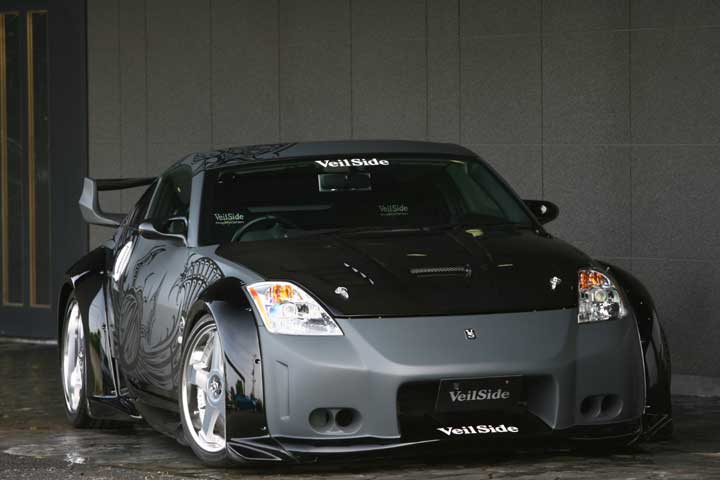 Despite being famous for its body kits, the company also provides an engine tuning service and sometimes uses their cars to compete in time attack, drag racing and drifting events such as D1 Grand Prix. 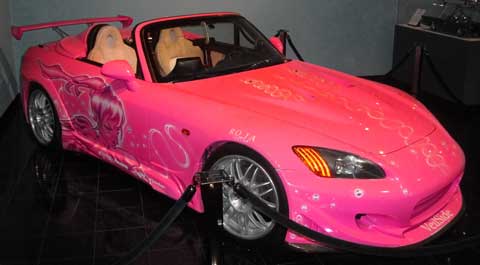 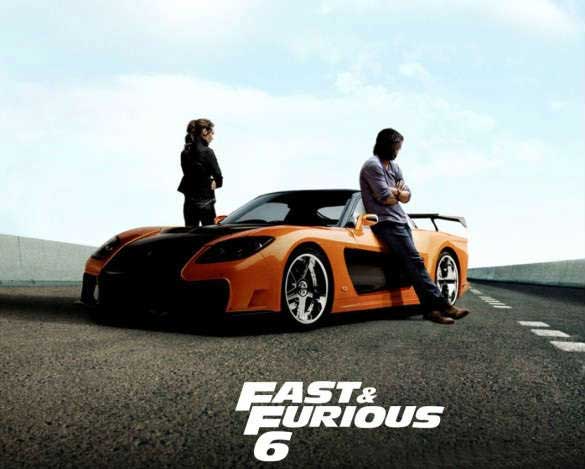 A Letter from Founder, Mr. YOKOMAKU,

Since VeilSide Start in 1990, has built many records and histories with SKYLINE GT-R’s, 80 Supra’s & RX7 FD as well as Nissan Z’s. Before the establishment of Veilside, I always thought about “becoming THE BEST” since the days of motorsport racing. However, any tuner is a matter of course as have to follow the trend of designing from simple to extreme design but also has to be hip & cool to be trendy. From such pure & simple idea, I believe in my own sensibility and push forward into the world of never-ending design to create fresh brand new styling & design that no one ever created. Deeper and endless world like the deep sea, there is a world of dreams and excitement that no one has ever seen. Realization of sensitivity and ideal. VeilSide continues to build in pursuit of the new world.

Beginning with the production of the main vehicle for Hollywood Studio movie “Fast and Furious, 2Fast 2Furious & Fast Furious III – Tokyo Drift”, Mr. Yokomaku has worked on Lamborghini, Ferrari, McLaren, Bentley and other world-class design custom cars. “I worked on it”. The creation of intellectual beauty, the fusion of functionality and fashion, has a meaning in everything. Sensitivity and experience accumulated from horizontal curtain racing.

Track record extends to Nissan SKYLINE R32 Drag Racing, with Proven Japan record of 0-300km, and the world known record of the world’s fastest. The Veilside complete car created by our own custom work with the experience and sensitivity accumulated over the past 30 years will invite the world of VeilSide to invite you to the ultimate sacred place of custom no matter how the world moves hereafter.

Some products sold on this website can contain chemicals known to the State of California to cause cancer, birth defects, or other reproductive harm. This warning is part of our effort to comply with the California Safe Drinking Water and Toxic Enforcement Act of 1986 (known as “Proposition 65”). The warning does not mean that our products will necessarily cause cancer, birth defects, or other reproductive harm. While we believe our products are not harmful when used as designed, and we rely on our suppliers to help with this effort, we also provide these warnings to comply with Proposition 65.  What is Proposition 65? For more information about Proposition 65 please visit: https://www.p65warnings.ca.gov/